Falmouth harbour, the third deepest natural harbour in the world, is guarded on two headlands by Tudor castles, Pendennis and St Mawes built by Henry VIII but on the eastern side of the mile wide entrance stands the elegant white tower of St Anthony Lighthouse.

Rumour has it that the ancient manor on the Roseland, known as Place, was founded by a cell of monks who kept the first light burning on St Anthony Head in medieval times. In the 17th century the infamous Killigrew family are said to have installed a large red flag hanging from an elm tree as a navigational guide. But despite the busyness of the waterway it was not until the 19th century that a proper lighthouse was completed.

Unlike some of its counterparts on wave ravaged rocks out at sea the construction of the new ‘Falmouth Light’ was fairly straightforward, taking Messrs Olver, the local builders, only one year to complete at a cost of £2,895. The base of the tower is of granite 1.5m thick and the light stands at an elevation of about 22m above the sea.

The first light was lit on the 20th April, Easter Monday, 1835 and “immense crowds” visited during the course of that day and in the coming weeks and months. A new lighthouse was always an exciting event in Cornwall and this one quickly proved its worth. In October that year the steam ship Shannon was caught in a gale, the crew spotted St Anthony’s light from 16 miles out at sea and were able to run for the harbour and safety.

During its early life the lighthouse was not equipped with a fog horn but it did have a fog bell which was secured to the outside of the tower. This bell was enormous, weighing around two tons, and was said to be the largest in Cornwall, its nearest rival was the tenor bell in Truro Cathedral. A system of weights and pulleys operated to ring it at regular intervals as well as rotate the light. Surprisingly the fog bell remained in place until 1954 when the whole lighthouse was electrified and it was replaced by a nautophone apparatus.

St Anthony Lighthouse is also affectionately known by locals as “Fraggle Rock” due to the fact that it featured in the opening credits of the popular 1980s children’s TV series of the same name!

The headland on which this lighthouse stands is now owned by the National Trust. Its popular with walkers especially in the summer when a ferry runs from Falmouth to nearby St Mawes and Place Quay. 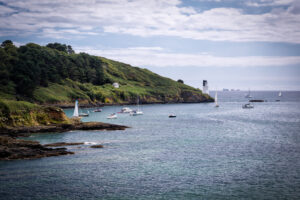 Spotting Seals on the Scillies

Surfer’s Paradise: 7 of the Best Surfing Beaches in North Cornwall

History of the Cornish Pasty

Go wild with a Christmas swim

What wines should I drink in Cornwall?

The History of Abbey House – Padstow